Pictures of El Anatsui’s show at the Brooklyn Museum. I tried to show the range of scales in the pictures. Most of the sculptures are made of whiskey bottle caps and canned milk lids. Click on the images to see them bigger. Photos taken on my phone. 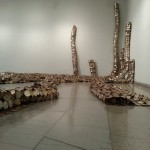 Snakes made from rolled sheets of linked milk can lids. 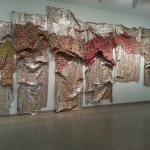 These cloaks were much bigger then a real cloak that a person would wear. Made of bottle caps that were flattened end-wise. 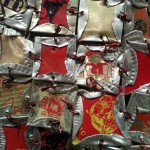 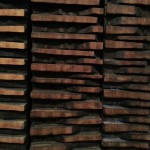 I was trying to figure out how these were made. They are said to be made with a chainsaw but I think kerfs were first cut with a circular saw. 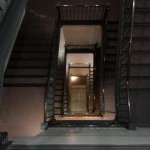 I am a fool for this picture. These old stairs were roped off, but one could look down. 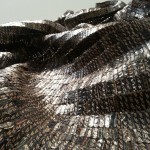 Looking up at a black tapestry. Made of interlinked unrolled bottle caps. 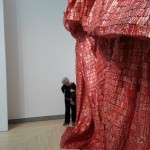 Red tapestry from the front. Made of interlinked unrolled bottle caps. 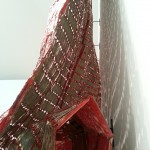 Red tapestry seen from behind. The light goes through. 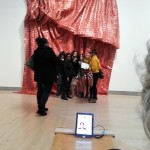 Teens posing in front of above. 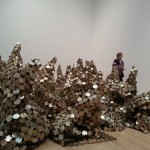 Yams made of milk can lids. 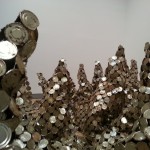 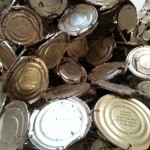 Here are some pictures of the aftermath of Hurricane Sandy. 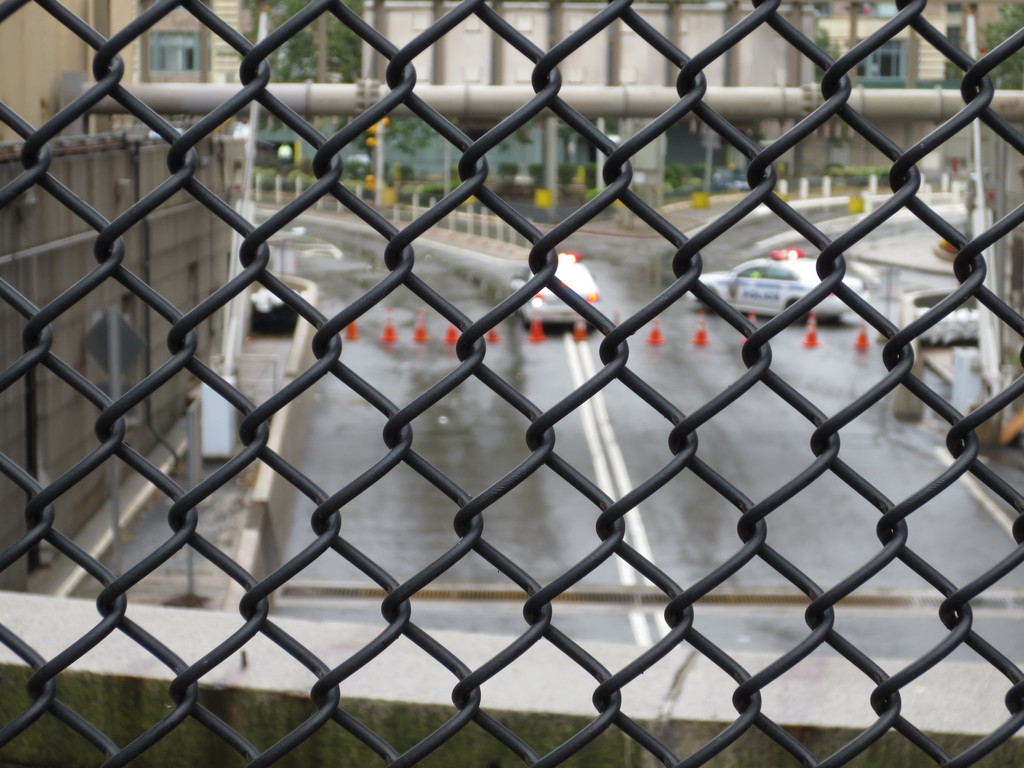 We took a walk the morning Sandy was moving out. This is a picture of the Holland Tunnel closed, I think from Broom Street. 2012-10-30 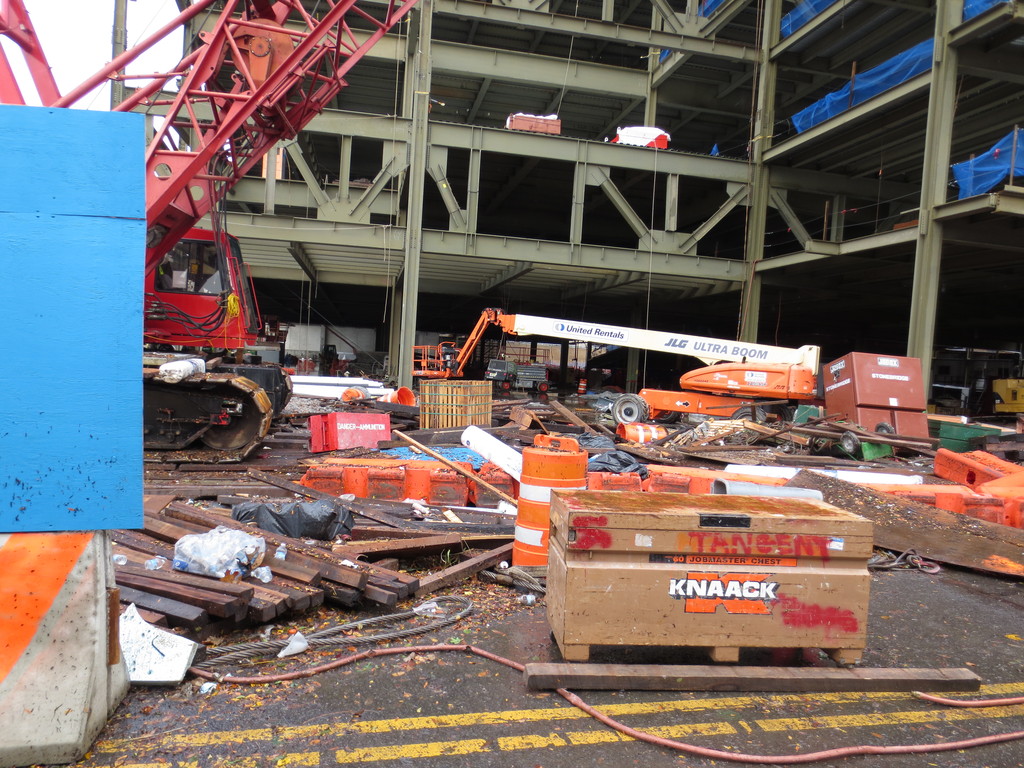 Truck(?) parking garage construction at Spring and West Streets. The fence around the site was blown down and equipment was strewn about everywhere. 2012-10-30 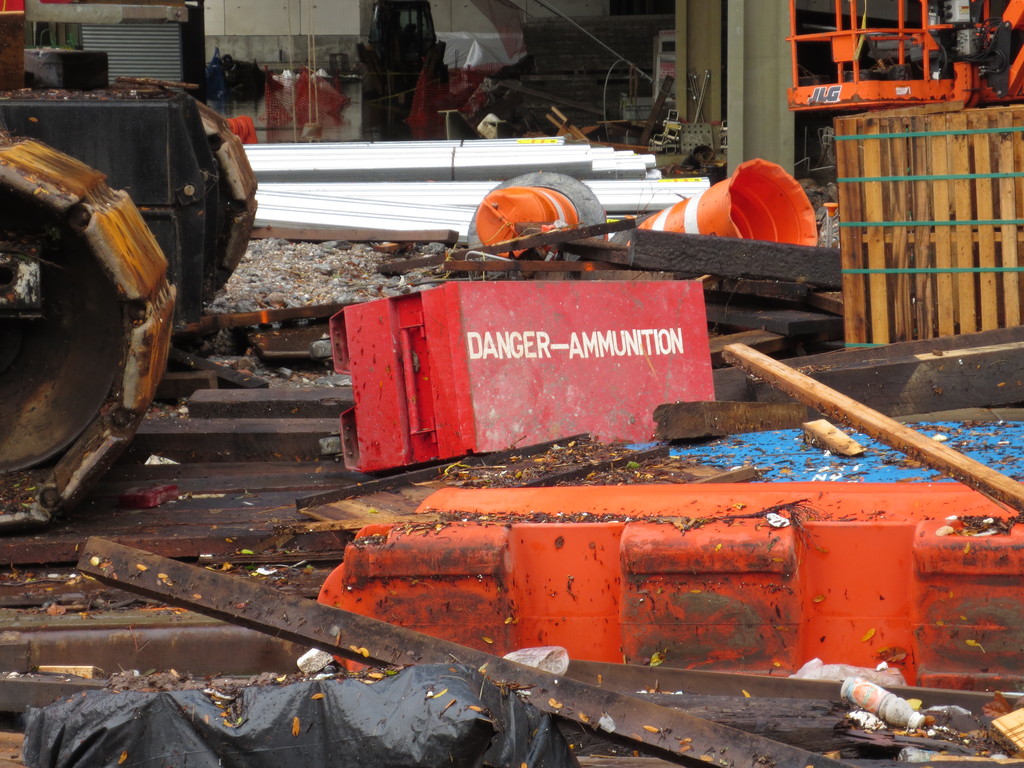 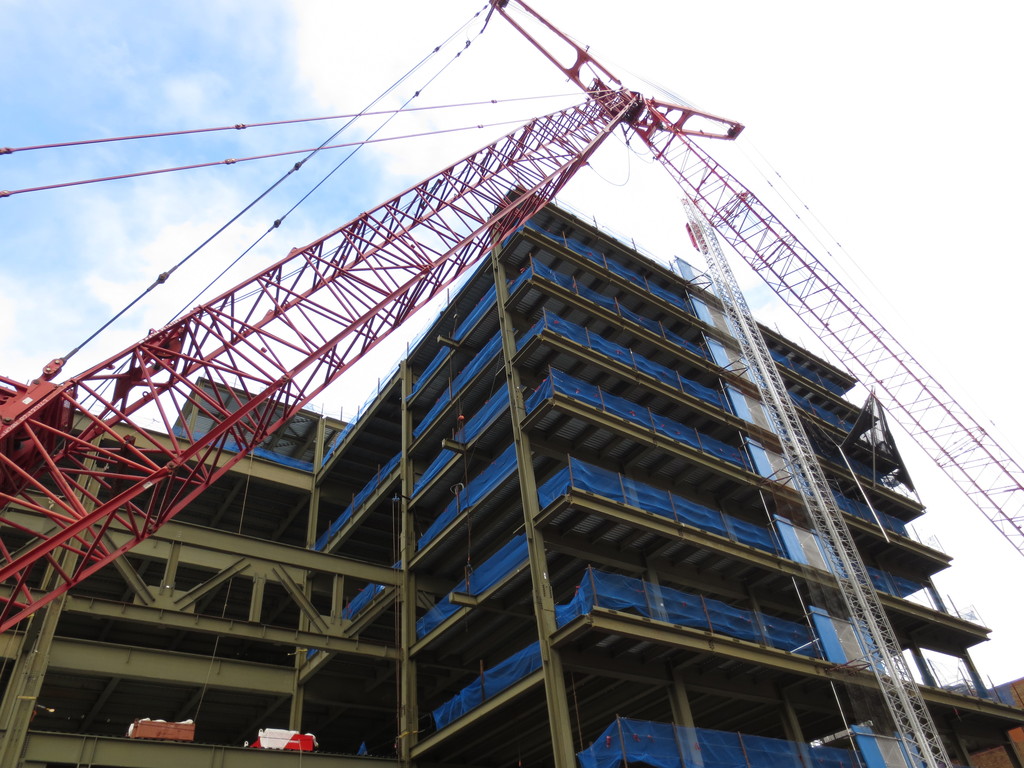 I suspect that the crane was folded for the storm rather than that it fell. Same site. 2012-10-30 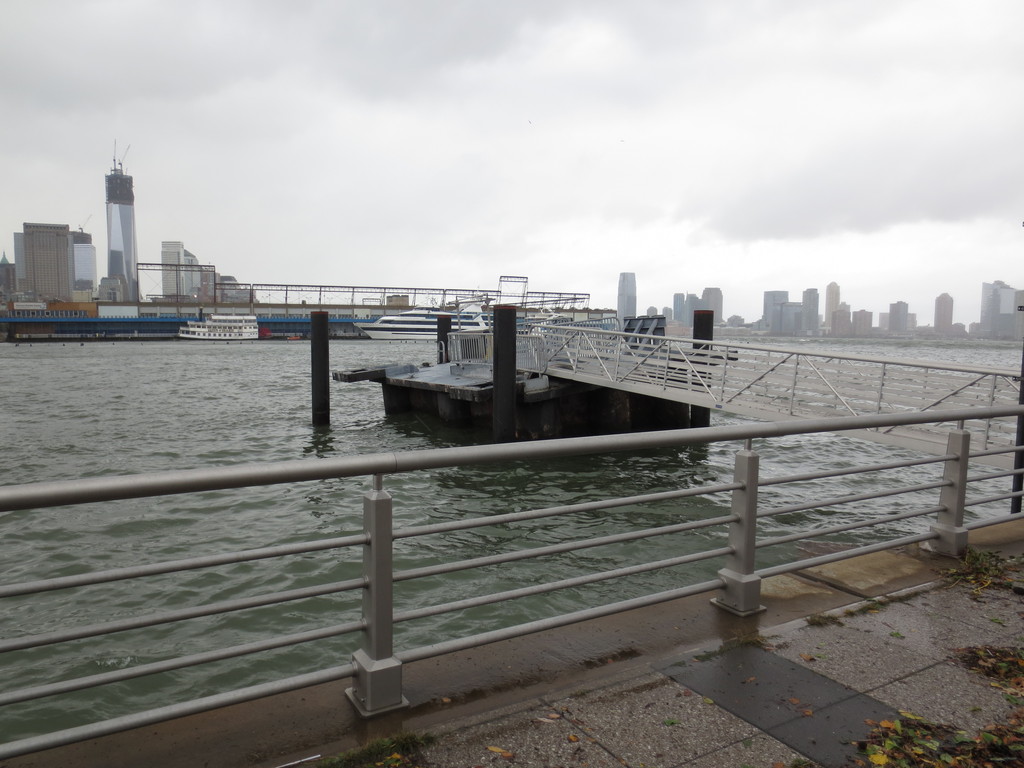 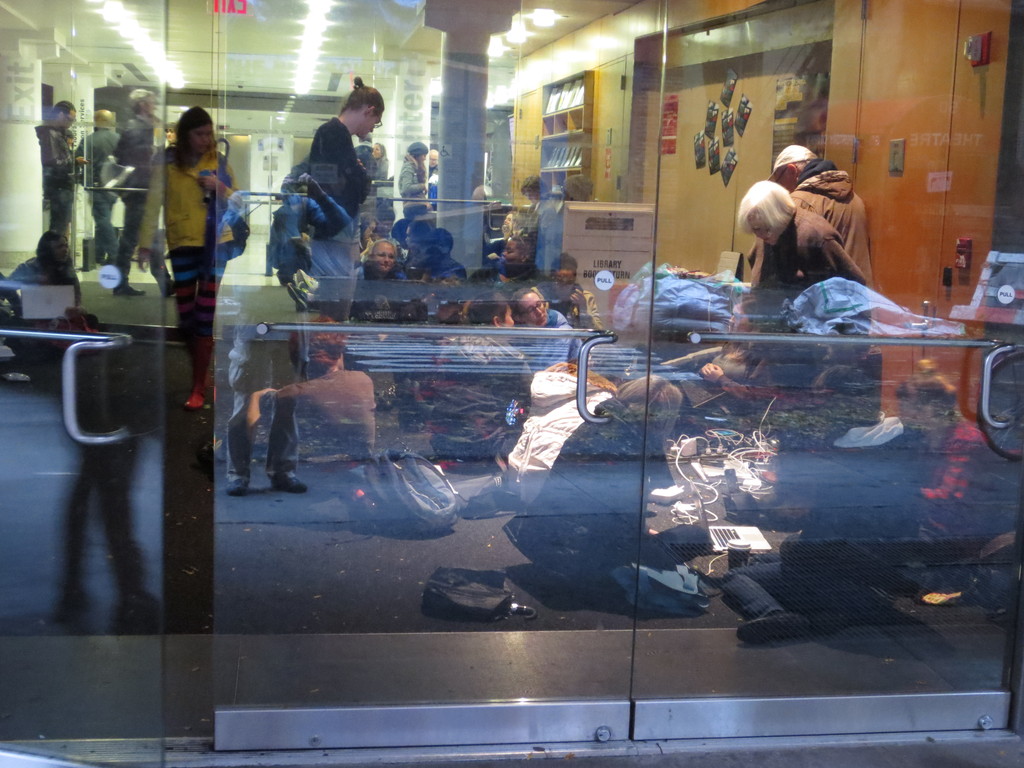 Student charging their electronics in the lobby of a New School building that had a generator. West 13th Street. 2012-10-30 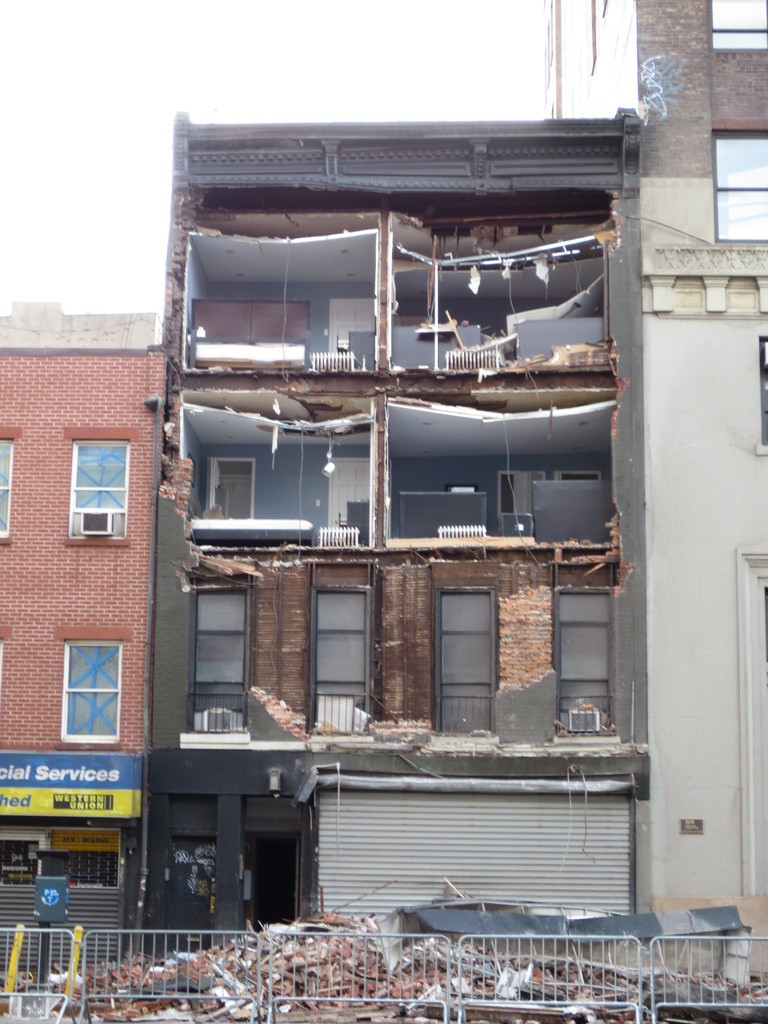 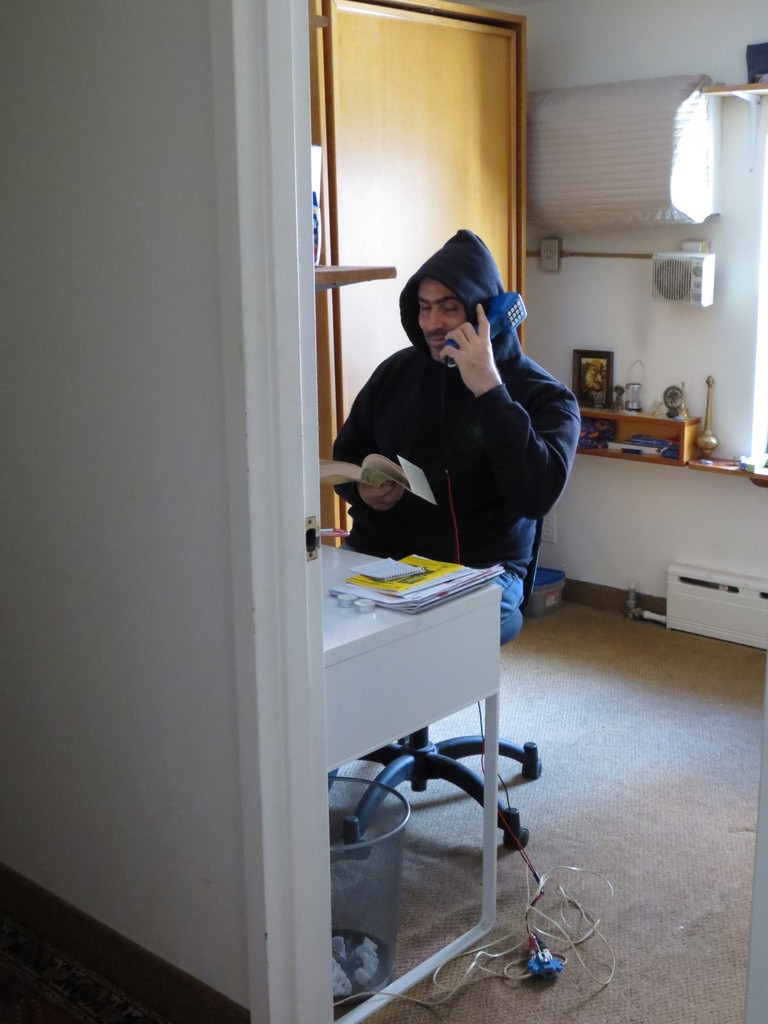 A worker taking calls on a butt phone in a building with no heat and no power for the phone system. 2012-11-01 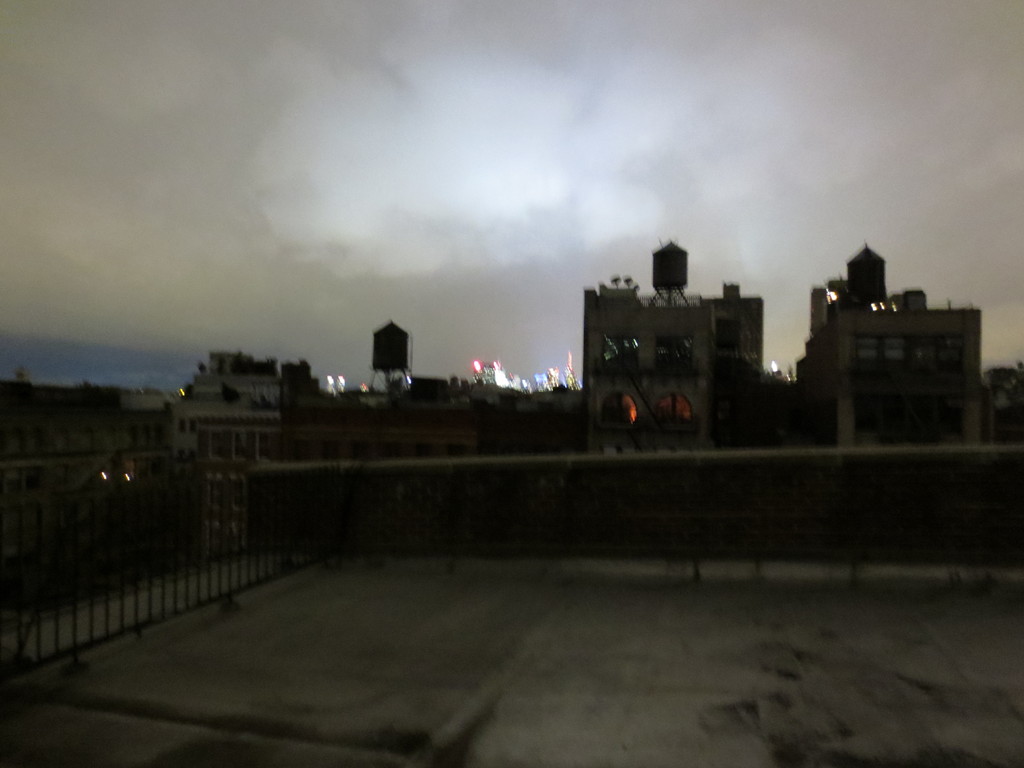 Power was restored all around us before we got power. View from tar beach, looking North. 2012-11-02 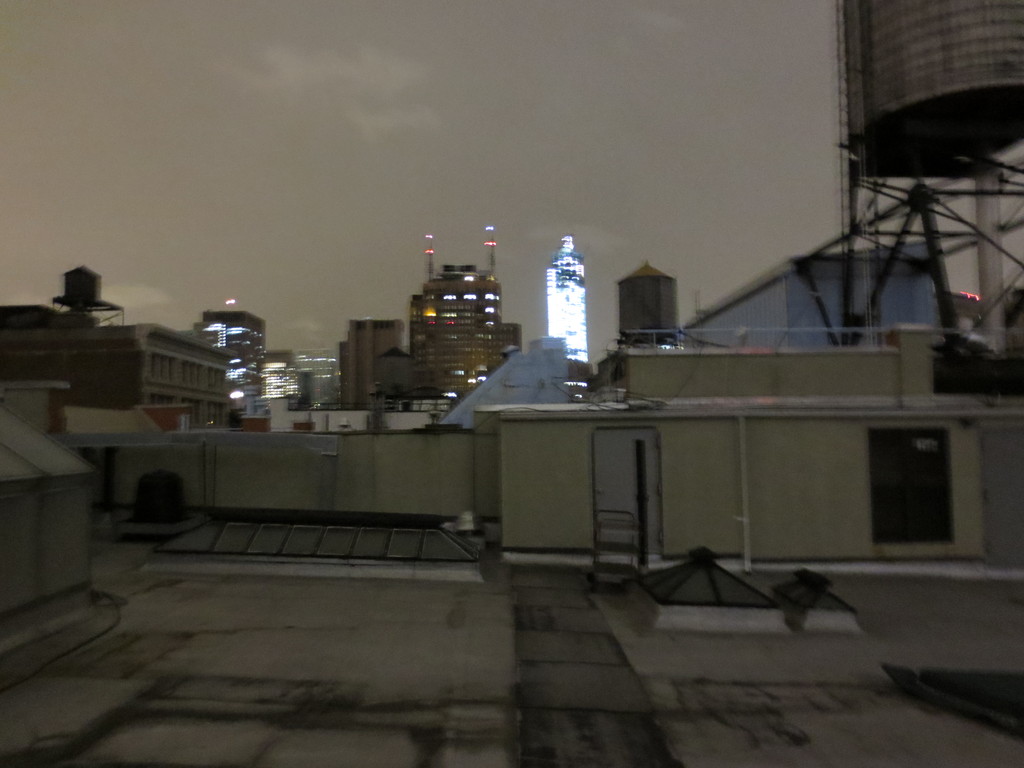 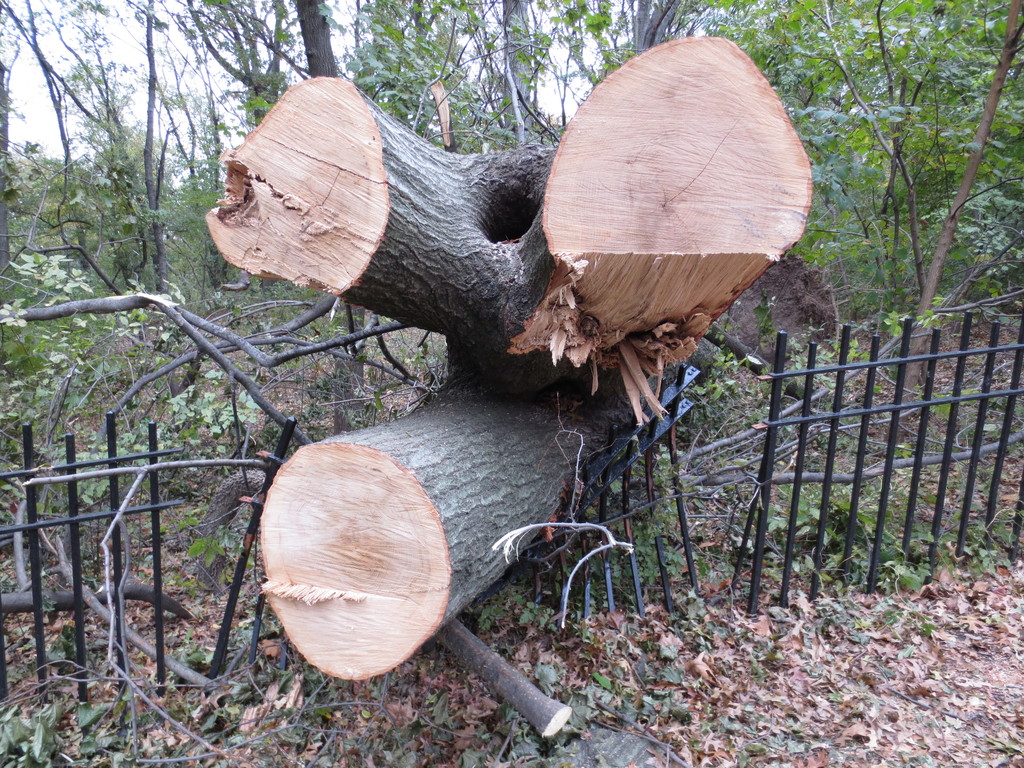 Riverside park. The iron fence this tree crushed is about four feet high. 2012-11-10 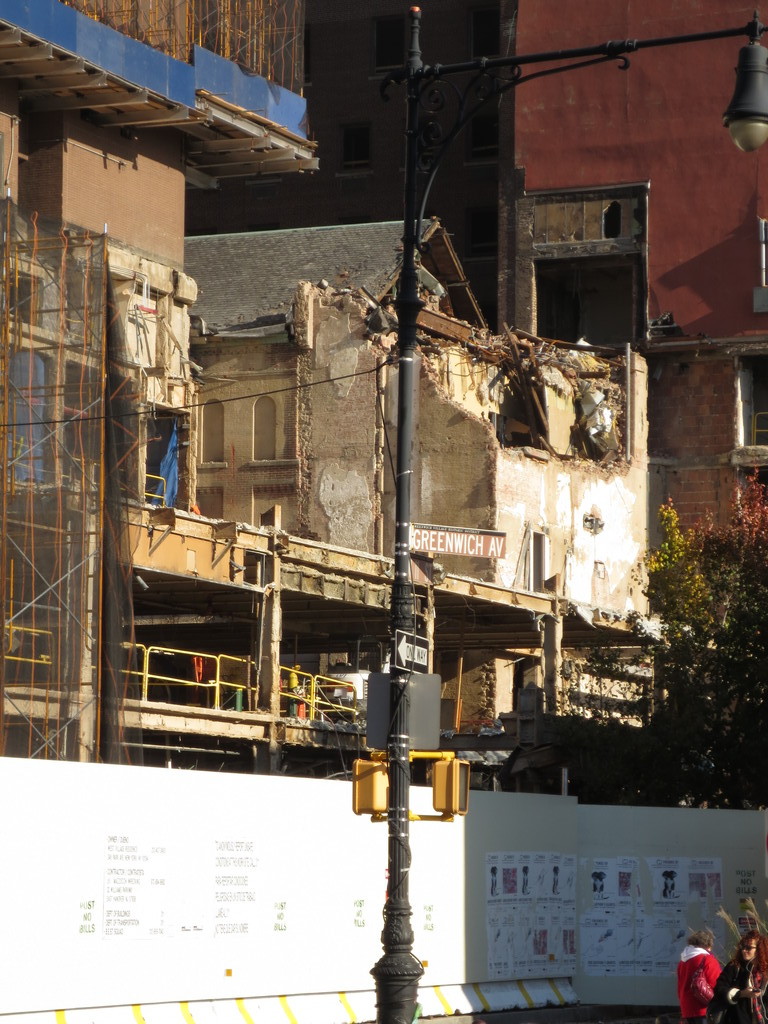 Nothing to do with Sandy really. This hidden church(?) has been revealed by the demolition of Saint Vincent’s Hospital. A few days later this building was gone. 2012-11-14 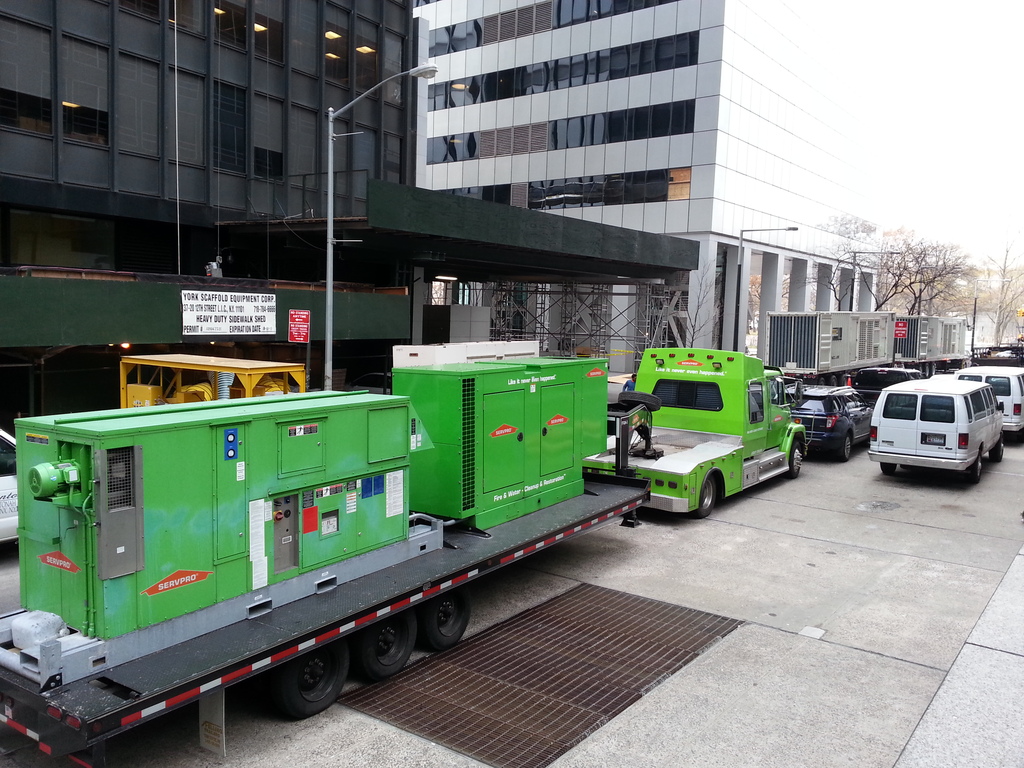 On December 1, we took a walk all the way downtown, walking downtown by the Hudson River and part way up through the Financial District. The first signs that things were still amiss were these green generators and men in white hazmat suits. 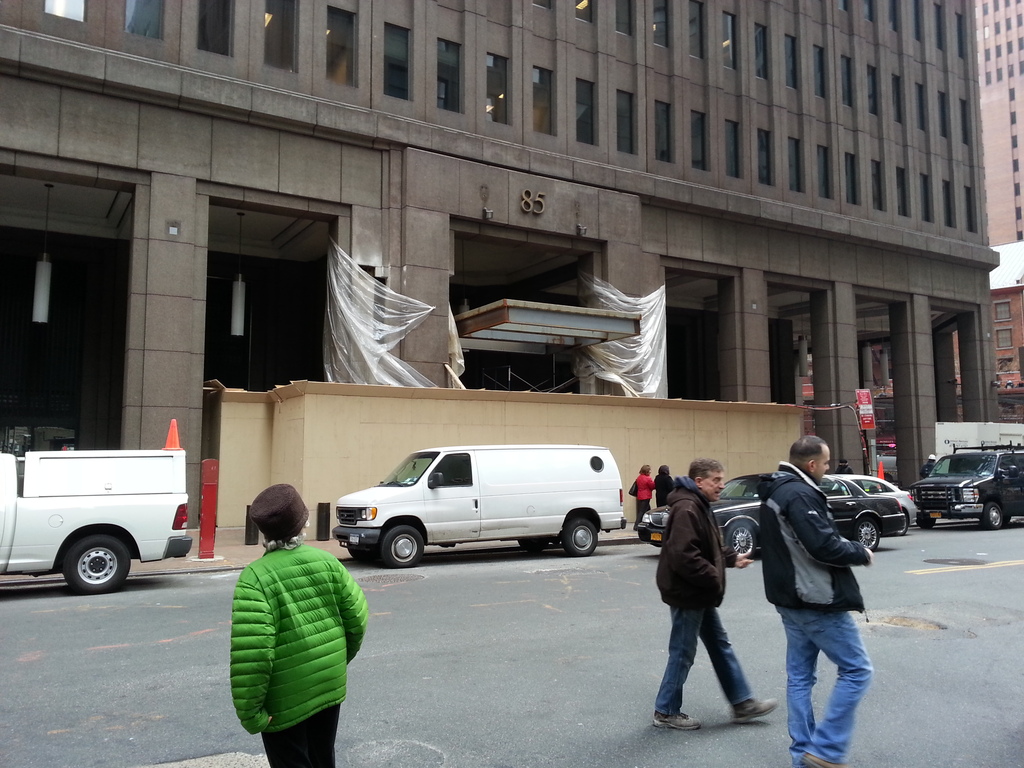 I managed a project at 85 Broad Street once. Likely I shouldn’t disclose details of their emergency preparedness plans, but I will say they were under the impression that they were ready for anything 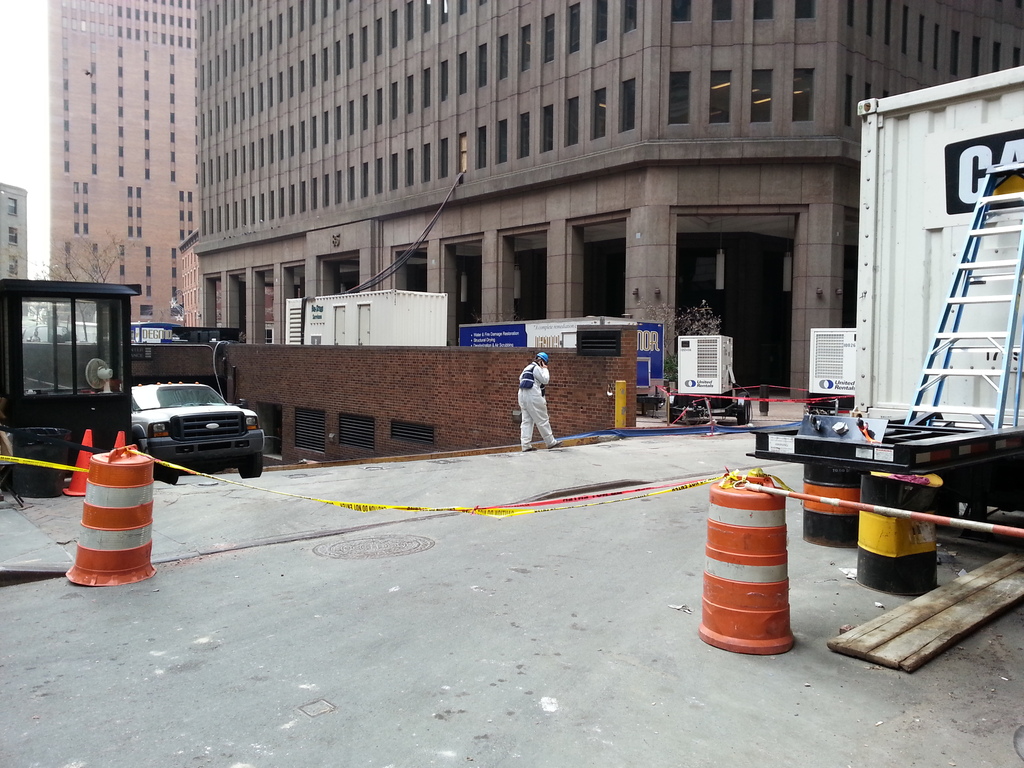 Here’s a view of the same building from South William St.